The International Rostrum of Composers takes in this year place from May 22 to 25 in Stockholm. Estonian music is represented by works of Liis Viira and Jüri

Reinvere. Tiia Teder, the chief editor at Klassikaraadio will also take part of jury’s work. The results will be announced in the afternoon of May 25.

Young composer Liis Viira (1983) has studied composition with Helena Tulve at the Estonian Academy of Music and Theatre. Additionally to composing, she is an active harp player, playing in Estonian National Symphony Orchestra and contemporary music ensemble Una Corda. Her work Book of Sand Grit (Liivaterade raamat) for harp, percussion and ensemble was composed for Estonian Music Days 2012 festival and Esbjerg Ensemble.

Berlin based Estonian composer Jüri Reinvere (1971) tries out art synthesis in his oeuvre and uses often texts as a part of his works. Also in his work The Empire of May (Maiimpeerium), dedicated to ensemble Resonabilis, the central point belongs to his own poem. Reinvere has graduated from Sibelius Academy in Helsinki (2004), after gratuating from Tallinn Music High School. He also has studied at Fr. Chopin Academy of Music in Warschaw and University of Helsinki. Since 2005, Reinvere lives in Berlin. 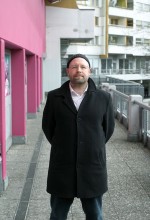 In 2000, Reinvere won first prize with his works (Loodekaar) in category of composers under 30 years. In april 2012, his yet biggest work , opera „Puhastus“ based on Sofi Oksanen’s story, took place at the Finnish National Opera.

The International Rostrum of Composers (IRC) is organized by the International Music Council with the financial assistance of participating radio networks. It is an international forum of representatives of broadcasting organizations who come together for the purpose of exchanging and broadcasting contemporary art music. Until 2002, its annual sessions were held at UNESCO headquarters in Paris, except for the 2000 edition which was held in Amsterdam at the generous invitation of Muziek Groep Nederland and the Gaudeamus Foundation. Since 2003, a rotation system has been put in place with the Rostrum traveling around Europe every second year while the other year, its is hosted by Radio France.

Currently, over 30 national radio networks participate in the Rostrum presenting some 60 works composed within the five years preceding the Rostrum. After the listening sessions, the assembly of delegates selects and recommends the most important works in two categories: general and "young composers". These and other works will be presented in concerts and broadcast after the Rostrum by the participating and other interested radio stations.