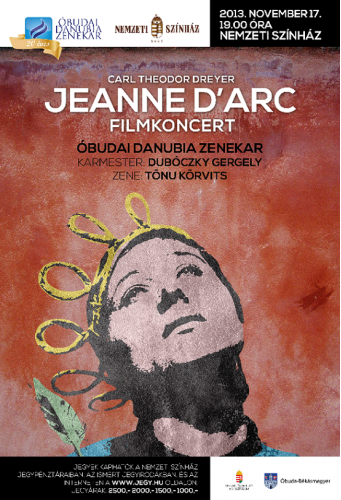 Yesterday, on November 17, Tõnu Kõrvits’s music for silent film La Passion selon Jeanne d’Arc, directed by Danish film director Carl Theodor Dreyer in 1928, was performed in Hungary. Music premiered in 2009 by Ensemble de Basse-Normandie was performed this time by Óbudai Danubia Orchestra in Budapest, National Theatre. Orchestra was conducted by Gergely Dubóczky, the composer was among the audience.

Dreyer is regarded by many critics and filmmakers as one of the greatest directors in cinema, La Passion selon Jeanne d’Arc was his first classical film. Although Dreyer intended the film to be watched in complete silence with no musical accompaniment, several scores have been composed later. In addition to Kõrvits, also Lithuanian composer Bronius Kutavičius has written music for that film in 2009.