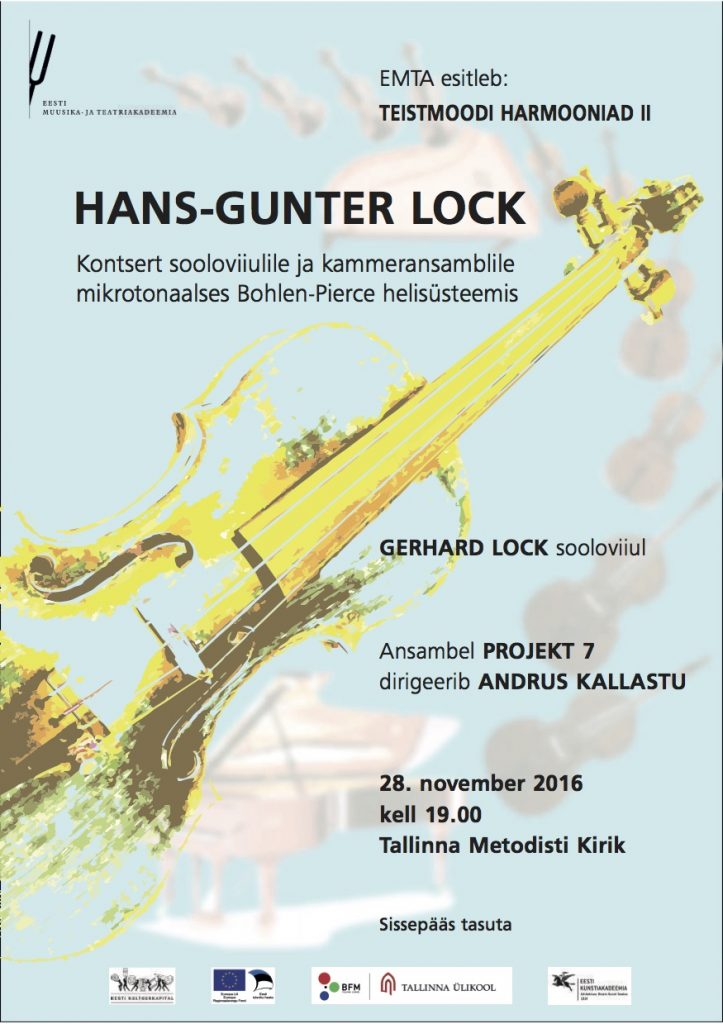 On November, 28th another concert of the series “Different Harmonies” will take place at Tallinn Methodist Church. There will be the world premiere of Hans-Gunter Lock’s Concerto for solo violin and chamber ensemble. Composer Hans-Gunter Lock owns teaching positions at the Estonian Academy of Music and Theatre as well as at the Estonian Academy of Arts. The concerto is peculiar due to the use of the so called Bohlen-Pierce tone system, which contains of a number on unusual intervals. Traditionally the most consonant intervals of the fifth and the octave don’t exist in this system, but the interval of the tritone, traditionally very dissonant “diabolo in musica” appears as very pleasently sounding instead. Based on this the composer has developed a special harmonic system, which has structural similarities to the traditional system of functional harmony, but the sounding result is surprisingly different, new and fresh.

The premiered piece contains partly of serially constructed material. For some textures, the pitch and the rhythm are developed from mathematical combinatorics and chance operations. Hence there can be found also elements similar to classical solo concertos, e.g. concerto grosso-like solo-tutti contrasts, ostinato technique and soloistic playing-techniques known from classic-romantic solo concertos.

The solo violin part will be performed by Gerhard Lock, lecturer at Tallinn University Baltic Film, Media, Arts and Communication School. Ensemble Projekt 7 is especially established for this concert and is conducted by Andrus Kallastu who is known for his experiences in contemporary music.