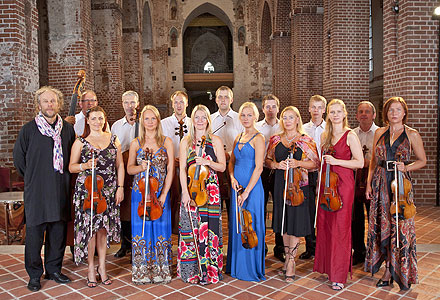 Glasperlenspiel Sinfonietta, former Tallinn Sinfonietta was founded in 2008 and was given its present name in 2012. Despite of a short activity period, the orchestra has moved hearts of the audience by its vitality and virtuosity both in Estonia and abroad – during the last years Glasperlenspiel Sinfonietta has performed in Switzerland, Austria, Italy, Finland, Germany, Belgium, Brazil, Chile, Argentina and Uruguay and also has taken part at international music festivals as Ars Musica in Brussels, Mittelfest and Emilia Romagna in Italy and Iitti Music Festival in Finland. Glasperlenspiel Sinfonietta has played on many prestigious stages in Europe such as Palais des Beaux-Arts in Brussels and Amsterdam’s Concertgebouw, getting high acclaim for each concert.
The Glasperlenspiel Sinfonietta´s unique artistic style encompasses not only the masterworks of the classical repertoire, but innovative cross-art form projects and a vigorous commissioning program. The orchestra´s repertoire entwines old and contemprary music, performing works from Bach to Tüür, from Corelli to Piazzolla.
Glasperlenspiel Sinfonietta was founded in aim to introduce to the listeners the music from the past as alive, breathing, joyful thing and prove that every type of music could bring freshness to the mind, warm the soul and give energy. It is only up to thinking and attitude. The resulting sense of energy and individuality is one of the most commented-upon elements of Tallinn Sinfonietta concert experience.
Chief conductor of the orchestra is since 2012 Andres Mustonen, principal violinists are Arvo Leibur and Sigrid Kuulmann.