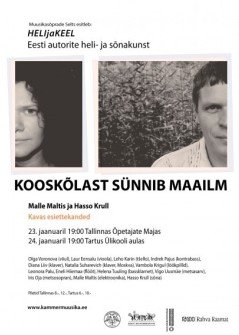 On January 23 and 24, Heli ja Keel (Sound and Language) concert series will continue with concerts dedicated this time to the oeuvre of composer Malle Maltis and writer Hasso Krull. The program of the concert entitled The Word Is Born of Accordance consists of works Res (2003), Wavescape with Eight Players (2013, premiere), The Rain Remains (2005, text: Hasso Krull), Kannel Patterns (2013, premiere), The Word Is Born of Accordance (2012, Estonian premiere), Dolce (2012), A Match (2012) and Counterflow (2011) by Maltis and poetry and prose by Krull.

Concerts starting at 7 pm will take place on January 23 at Tallinn Teachers’ House and January 24 at Assembly Hall of Tartu University.

Heli ja Keel concert series started in 2012 and is organised by NPO Muusikasõprade Selts. The aim of the series is to experience the connections and synergy of the art of sound and word and perceive the special relationships between creative persons.