From November 24 to December 8, pianist Tanel Joamets is in Russia to give eight concerts in seven cities. This tour is already the fourth for him this year – in February he performed in Latvia, Italy and Austria, in April he had concerts in Russia, Kazakhstan and in September-October he toured in Scandinavian countries.

This concert tour started with Tanel Joamets being the soloist in front of chamber orchestra “Gloria” on November 24. The program was conducted by Sergei Razenkov and included Wolfgang Amadeus Mozart’s Piano Concerto No 15. On November 25 and 26, Joamets made solo performances in Korsakov and Yuzhno-Sakhalinsk, November 30 in Vladivostok and December 1 in Ussuriysk. Before coming back to Estonia, he will have three concerts – today and tomorrow in Blagoveschensk and on December 8 in Petropavlovsk.
The list of composers whose works have and will be performed include Ferenc Liszt, Aleksandr Skrjabin, Frédéric Chopin, Sergei Rachmaninov, Edvard Grieg, Estonian composer Eduard Tubin et al. 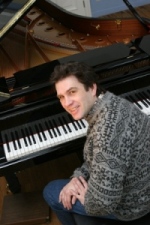