The audience can enjoy a diverse program consisting of seldomly heard music as well as traditional pieces in a completely new approach - the group of four violin concerti „The Four Seasons“ by Antonio Vivaldi is performed not only by solo violin, but also other instruments of the orchestra. Virtuoso Massimo Mercelli from Italy plays flute concertos by Antonio Vivaldi. The evening ends with „The Seasons’ Digest“ by Alexander Raskatov, which is based on „The Seasons“ by Pyotr Tchaikovsky. 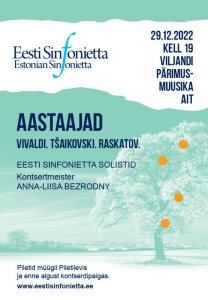