One of the most important pieces of classical music, “The Well-Tempered Clavier” from 1722, is the fundamental code and spiritual credo of the entire written musical culture of Europe. All of the subsequent generations, from Johann Sebastian’s own sons to Haydn, Mozart, and Beethoven, grew up on the foundations which were laid down by him. The extent of the meaning behind, and the impact of, “The Well-Tempered Clavier” are exceptionally wide and deep. It provides a textbook example of playing keyboard instruments along with providing techniques for musical composition, bringing together the entire pre-Bach library of music and paving the way for the following centuries of creativity while also expressing in classical music the full spectrum of the feelings involved in human existence.

This year marks the 300th anniversary of the creation of “The Well-Tempered Clavier”, which will be celebrated by the entire piece being performed by twenty-four Estonian pianists, from the most talented young apprentices to well-known concert pianists and beloved masters. The performance will be tied into an uninterrupted whole by a visual piece. This is being based upon the themes of “The Well-Tempered Piano” which have been created by the acknowledged photographer Kaupo Kikkas, which will be accompanying the music on a big screen. 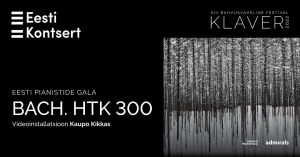