The concert Forbidden Love will feature a selection of works inspired by love stories, conducted by the principal conductor of ERSO Olari Elts. Violin Concerto by Pyotr Tchaikovsky, which is considered one of the best violin works, will be performed by the outstanding Swedish violinist Daniel Lozakovich. Despite his young age, Lozakovich has been described as a ‘serious artist’ whose skills are comparable to those of the great masters (Hamburger Abendblatt). In November of this year, ERSO and Lozakovich will also go on a joint concert tour to Paris and Munich.

Two other symphonic poems will also be performed. The Symphonic Poem Psyche et Eros by César Franck, based on a pagan legend, is a colourfully composed passionate love affair between earthly and heavenly powers. The fourth symphonic poem by Mieczysław Karłowicz, Stanisław and Anna Oświecimowie, is inspired by a painting by artist Stanisław Bergmann based on a legend of the incestuous love between brother and sister. Suite No. 2 from the Choreographic Symphony Daphnis et Chloé by Maurice Ravel will also be performed. The symphony orchestra of the Estonian Academy of Music and Theatre will perform at the concert together with ERSO.

Concert organisers ERSO and the Estonian Academy of Music and Theatre 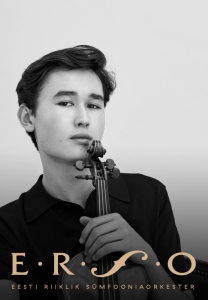