Perpetuum Jazzile is one of the largest and most special vocal groups in the world. The repertoire of the almost thirty-member vocal orchestra includes unique arrangements from such top musicians as ABBA, Toto, Michael Jackson, The Queen, Daft Punk, David Guetta, Lady Gaga, David Bowie, Joni Mitchell, BeeGees, etc., as well as original arrangements of Slovenian folk songs.

To date, Perpetuum Jazzile has collected more than 88 million views on Youtube, and their music videos have been among the 40 most-watched clips. The video “Africa” (Toto), which has gained a large audience for Perpetuum Jazzile, brought the group a dignified award Viktor Award of Special Achievement in Slovenia. The performance of the vocal ensemble is full of rich harmonies, positive energy, and influences from pop, rock, jazz, gospel, blues.

The first half of the concert features the beloved Estonian vocal ensemble Estonian Voices, who will also perform a couple of completely new songs. 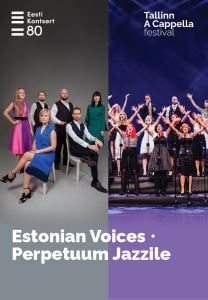