Artur Kapp was one of Estonia’s first professional composers and the founder of a composition school influential in the first half of the 20th century. His son Eugen Kapp (1908–1996) and nephew Villem Kapp (1913–1964) were also renowned composers.

Artur Kapp’s oeuvre includes both works for symphony orchestra and chamber music, choir and solo songs. Also known as an organ virtuoso, Artur Kapp wrote Estonia’s first organ concerto. Many of his other works were among the first in their genre in Estonia (overture Don Carlos, Symphony No. 1, cantatas, organ sonata).

Classical and romantic traditions, the works of Bach and Beethoven, and German and Russian romantic composers, shaped Artur Kapp’s spectacular yet strict style. Romantic pathos in his major works is moderated by an elaborate use of counterpoint. The message of Kapp’s music is mostly dramatic, inspired by philosophical and existential reflections. The lyrical side of Kapp’s gift appears in his melody-rich subminiatures.
The territory carved out in Estonian music by Artur Kapp was further developed by his students Eugen Kapp, Evald Aav, Riho Päts, Edgar Arro, Juhan Jürme, Enn Võrk, Johannes Hiob, Johannes Bleive, Gustav Ernesaks, Villem Kapp, Villem Reimann and others.

Artur Kapp began his studies at the St. Petersburg Conservatoire in 1891. In 1898, he graduated from Louis Homilius’s organ class, and in 1900, Nikolai Rimsky-Korsakov’s composition class. From 1904–1920 he was employed as the director of the Astrakhan Music School. Returning to Estonia in 1920, Artur Kapp became the conductor of the "Estonia" Theatre (1920–1924) and the member of the composition faculty at the Tallinn Conservatoire (professor since 1925, head of the faculty 1925–1944). From 1924–1934, he also led the Estonian Academic Society of Music Artists. In his retirement in 1944, Artur Kapp returned to his hometown of Suure-Jaani.
Artur Kapp was awarded the title of Merited Art Worker of the ESSR (1945). He got the Prize of the Soviet Estonia (1949) and the USSR State Award (1950).

The Suure-Jaani Music Festival, held from 1998, and the International Artur Kapp Society founded in 2001 have contributed to the popularisation and study of Kapp’s work. An important event in rediscovering the music of Artur Kapp was the performance of his oratorio Job in 1997, after a 50-year-long hiatus.

The publisher of Artur Kapp’s works is Edition Eres Estonia. 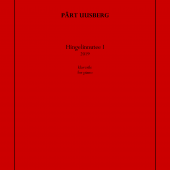 Hingelinnutee I (Milky Way - a Path of Souls), for piano
See more scores