In 2001, Mariliis Valkonen graduated in music theory from the Tallinn Georg Ots Music High School where she also studied composition with Lembit Veevo. In 2005, she got bachelor degree in composition from the Estonian Academy of Music as a student of Prof. Eino Tamberg. In 2012, Mariliis obtained master degree at the Estonian Academy of Music and Theatre with Helena Tulve. In 2004 and 2006, Mariliis Valkonen took part in the International Workshop for Young Composers in Dundaga, Latvia.

"I like to think of a musical piece as of a song. This idea could be extended to any work of art. Singing is intrinsic to a human being. Singing as breathing. There is always a story to tell with a song. When composing I try to imitate ideas with my voice – even the most abstract or non-melodic ideas, I always try to feel out the image.

Intuitivity is particularly important for me when writing music. I have never used mathematics, geometry or special techniques. Nor have I restricted myself with rigid systems. This could also be the reason why the form of my works is so fragmental and discontinuous. I haven’t recognized my style yet. Moreover – I actually like the thought of "not having a style". Every new piece could be disparate from the previous one. Common characteristics that remain would be some strong and clear gestures and/or humorous alien particles." 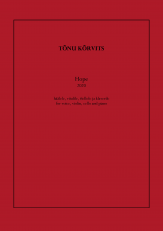